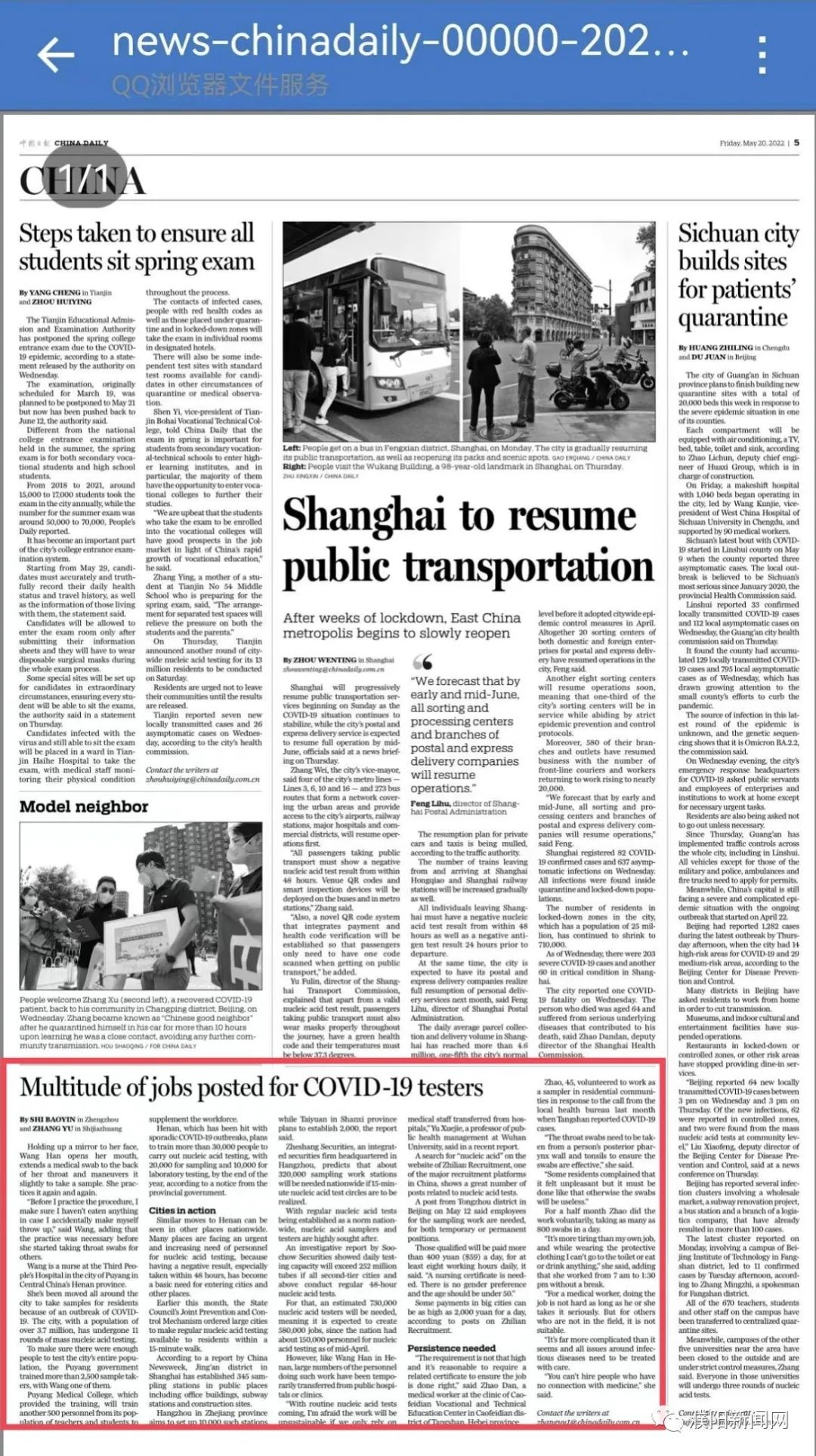 A medical worker prepares to take a swab sample from a resident for nucleic acid test at a testing site in Beijing, May 7, 2022.

Holding up a mirror to her face, Wang Han opens her mouth, extends a medical swab to the back of her throat and maneuvers it slightly to take a sample. She practices it again and again.

"Before I practice the procedure, I make sure I haven't eaten anything in case I accidentally make myself throw up," said Wang, adding that the practice was necessary before she started taking throat swabs for others.

Wang is a nurse at the Third People's Hospital in the city of Puyang in Central China's Henan province.

She's been moved all around the city to take samples for residents because of an outbreak of COVID-19. The city, with a population of over 3.7 million, has undergone 11 rounds of mass nucleic acid testing.

To make sure there were enough people to test the city's entire population, the Puyang government trained more than 2,500 sample takers, with Wang one of them.

Puyang Medical College, which provided the training, will train another 500 personnel from its population of teachers and students to supplement the workforce.

Henan, which has been hit with sporadic COVID-19 outbreaks, plans to train more than 30,000 people to carry out nucleic acid testing, with 20,000 for sampling and 10,000 for laboratory testing, by the end of the year, according to a notice from the provincial government.

Similar moves to Henan can be seen in other places nationwide. Many places are facing an urgent and increasing need of personnel for nucleic acid testing, because having a negative result, especially taken within 48 hours, has become a basic need for entering cities and other places.

According to a report by China Newsweek, Jing'an district in Shanghai has established 345 sampling stations in public places including office buildings, subway stations and construction sites.

Hangzhou in Zhejiang province aims to set up 10,000 such stations while Taiyuan in Shanxi province plans to establish 2,000, the report said.

Zheshang Securities, an integrated securities firm headquartered in Hangzhou, predicts that about 320,000 sampling work stations will be needed nationwide if 15-minute nucleic acid test circles are to be realized.

With regular nucleic acid tests being established as a norm nationwide, nucleic acid samplers and testers are highly sought after.

For that, an estimated 730,000 nucleic acid testers will be needed, meaning it is expected to create 580,000 jobs, since the nation had about 150,000 personnel for nucleic acid testing as of mid-April.

However, like Wang Han in Henan, large numbers of the personnel doing such work have been temporarily transferred from public hospitals or clinics.

"With routine nucleic acid tests coming, I'm afraid the work will be unsustainable if we only rely on medical staff transferred from hospitals," Yu Xuejie, a professor of public health management at Wuhan University, said in a recent report.

A search for "nucleic acid" on the website of Zhilian Recruitment, one of the major recruitment platforms in China, shows a great number of posts related to nucleic acid tests.

A post from Tongzhou district in Beijing on May 12 said employees for the sampling work are needed, for both temporary or permanent positions.

Those qualified will be paid more than 400 yuan ($59) a day, for at least eight working hours daily, it said. "A nursing certificate is needed. There is no gender preference and the age should be under 50."

Some payments in big cities can be as high as 2,000 yuan for a day, according to posts on Zhilian Recruitment.

"The requirement is not that high and it's reasonable to require a related certificate to ensure the job is done right," said Zhao Dan, a medical worker at the clinic of Caofeidian Vocational and Technical Education Center in Caofeidian district of Tangshan, Hebei province.

Zhao, 45, volunteered to work as a sampler in residential communities in response to the call from the local health bureau last month when Tangshan reported COVID-19 cases.

"The throat swabs need to be taken from a person's posterior pharynx wall and tonsils to ensure the swabs are effective," she said.

"Some residents complained that it felt unpleasant but it must be done like that otherwise the swabs will be useless."

For a half month Zhao did the work voluntarily, taking as many as 800 swabs in a day.

"It's more tiring than my own job, and while wearing the protective clothing I can't go to the toilet or eat or drink anything," she said, adding that she worked from 7 am to 1:30 pm without a break.

"For a medical worker, doing the job is not hard as long as he or she takes it seriously. But for others who are not in the field, it is not suitable.

"It's far more complicated than it seems and all issues around infectious diseases need to be treated with care.

"You can't hire people who have no connection with medicine," she said.